Every day when Tommy gets on the bus he blows his mom a kiss from the window.

A kid made fun of him for doing it.

Tommy said “Well, I do it because there’s no guarantee she’ll be here tomorrow.”

This STFU moment brought to you by my brilliant son.

Posted by Phil Barth at 5:06 AM No comments:

For as long as I can remember we have the birthday tradition of getting a Pepperidge Farm chocolate fudge layer cake for Beth's birthday.

And it's nut free.

Actually it's not for as long as I can remember, because in 2008 we didn't get the cake.

That was the year hurricane Ike made it all the way to Ohio.

We lost power, but only for a day.  Some people lost it for a week.

I went to Wal Mart looking for a Pepperidge Farm cake, and the only thing they had in the frozen dessert section was Frozen Mini Chocolate Eclairs.

They didn't hold candles, but they were a neat birthday dessert.  Not one worth starting a tradition mind you - although I think we got them a time or two after.s
Posted by Phil Barth at 5:58 AM No comments:

Warning:  If you are some day planning on watching Downton Abbey - read no further.  Unless you've made it past season three.


Actually, if you've made it past season two you might want to read further.


It was at some point in season two that I decided to learn the history of the actors and actresses in Downton Abbey.  There were a few that were familiar, but most were not.


I went to IMDB to learn who they were.  Big mistake.  Or so I thought.


Because it turns out three of them were only listed as being in seasons one through three:  Miss O'Brien (No big loss), Sybil (What?  one of the three daughters) and... Matthew.


I figured out what happened with Sybil:  Died during childbirth.  Not a surprise.


And O'Brien was so mean - there were any number of possible endings for her - all of them welcome.


It turned out the actor wanted to do something else so they wrote him off.


And they did it in the most horrible way possible.  His wife had a baby - and he was driving home, and one head on collision later, he's done.


The worst part of it:  The original episode was shown on Christmas Day.


In this case, knowing it was coming was a good thing.  And not watching it on Christmas Day was also a good thing.
Posted by Phil Barth at 5:00 PM No comments:

I had to snap a picture of this.  The As Seen on TV Organ Transplant Cooler.


Frankly, I have never seen this advertised on TV.  I suppose I have seen an organ transplant cooler on an episode of House, but I don't think that's what they meant.


$20 sounds a bit high for a soft sided zipper lunch cooler.  Of course I live in Ohio.  So a regular non-organ transplant cooler seems to do the job fine with my lunch.  Maybe in Arizona you need organ transplant grade.


I decided to look it up.  They have them for sale on Amazon.  But the attraction is the labeling!  There is nothing really special about the cooler itself.  It's just a regular cooler.  In the product description it even notes:  For transplanting liverwurst, not a liver,


I couldn't really come up with a reason why someone would want to plunk down $20 for this cooler,  But then my friend Joe Glassmeyer came up with one reason:  It will keep co-workers from stealing your lunch. 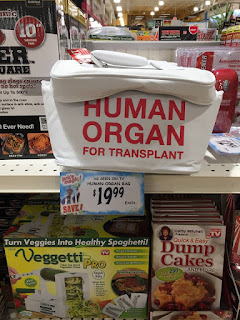 Posted by Phil Barth at 5:00 PM No comments: