Okay, in hindsight this one hurts a little to write about.

As noted in week one, I have replaced Sunday afternoon NFL football with projects or other pursuits.

This really wasn't much of a problem up until week four:

But on week four the Browns played at Baltimore on Sunday afternoon. And the game was televised in the Cincinnati area, given that the Bengals were playing in Pittsburgh on Monday night. (If we define playing using the 2017 Cleveland Browns definition:  Showing up wearing helmets).

Meanwhile the Browns went to Baltimore and won going away 40-15. I saw the updates come through on my phone all afternoon...

But I digress. I didn't watch football on Sunday.

Instead we had a family dinner, followed by our Sunday project:  Painting the finished basement (brown wall only).  Tom cleaned the baseboards, Beth did the detail work and I did the roller work.

This is the first step in creating a TV area and office area in the basement.

And it turned out pretty good. 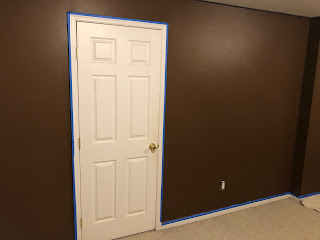 THINGS I DID ON SUNDAY AFTERNOON INSTEAD OF WATCHING THE NFL:

1. Spent quality time with extended family.
2. Read a book and did a GTD review on a flight to Canada.
3. Painted the basement wall in preparation for the new office and entertainment areas.
Posted by Phil Barth at 12:24 PM