The Great No Football Experiment - Week... well I lost count, but it's October 27

This week's project actually happened on Saturday (with some spillover to Sunday).

We chose Saturday for the project because Sunday (today) was our 29th wedding anniversary. We took the family to Red Lobster to celebrate.

(NOTE:  The Browns / Patriots game was on in the bar at Red Lobster. I did peek at the score. And I was both happy and disgusted. Happy that I committed to this idea, and disgusted by the score - 17-0 at the time.)

On Saturday we did a bedroom cleanout - for me it was mostly centered around organizing the closet.  I generated a couple of boxes of clothing for Salvation Army, and cleaned and organized the space.

In addition we filled a box or two of old VHS tapes and DVDs. While not a project per se, it sets the stage for a bigger project: The master bedroom reorganization (new TV and get rid of some furniture).

On Sunday we had time after church and before Red Lobster so my son Tom and I stacked firewood on the deck. We are now ready for a cold winter.

Following that we cleaned up, changed and went to Red Lobster (Mahi Mahi and more!) and Jungle Jim's (Wine and more!) 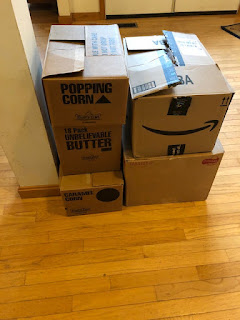 1. Spent quality time with extended family.
2. Read a book and did a GTD review on a flight to Canada.
3. Painted the basement wall in preparation for the new office and entertainment areas.
4. Cleaned out the detached garage.
5. Cleaned up the yard and burned up everything in the fire pit (killing lots of weeds in the process).
6. Assembled a basketball hoop.
7. Cleaned and organized the master bedroom closet.
Posted by Phil Barth at 6:31 AM