Let's get the Browns result out of the way: They won. 19-16. Yet had I watched it I probably would have aged a year in three hours, given the fact that:

- They managed to do something that hadn't been done in YEARS - fail to score despite having eight plays inside the opponent's one yard line, and
- On the game winning drive Baker Mayfield almost fumbled, and the almost fumble was returned for what would have been a game icing Buffalo touchdown. (Replay overturned it) and
- Buffalo missed what would have been the game tying field goal near the end of the game.
Still a win is a win. But I'm glad I missed it.

What we did this week:


We started on Saturday. I deployed the new spice shelf. We moved all spices to one central area. And it looks good: 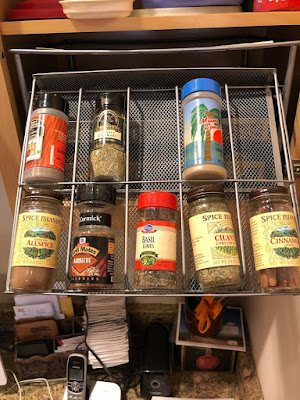 Yet to be decided: Will we use the labels, and will we alphabetize the spices? The serial organizer part of me wants to do both, but the practical side of me says "three shelves, 36 spices, not really necessary".


After the spice shelf I completed the bar reorganization by assembling the new Ninja blender. 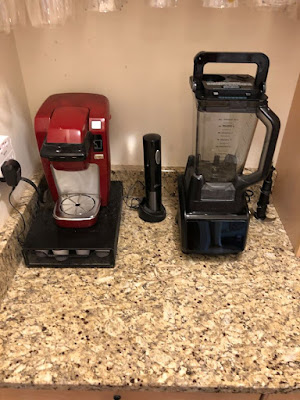 
On Sunday we had a day of really nice weather.

Beth cleaned out the bog garden.
I wish we had before pictures - but we were too busy working.