Let's get rid of the ugliness first: The Browns lost to the Bengals. This doubled the Bengals' win total, and doomed (if they weren't doomed already) John Dorsey and Freddie Kitchens.
Speaking of Kitchens, we spent some of our Sunday project day in the kitchen... loading up our plates with food.

Sunday was another one of our family parties. Tis the season...

We tend to have a few more parties than most, due to late December birthdays. The schedule breaks out like this:

The Paige birthday dinner fell on Sunday. We had lasagna and wine.

Here are pictures from the various festivities. 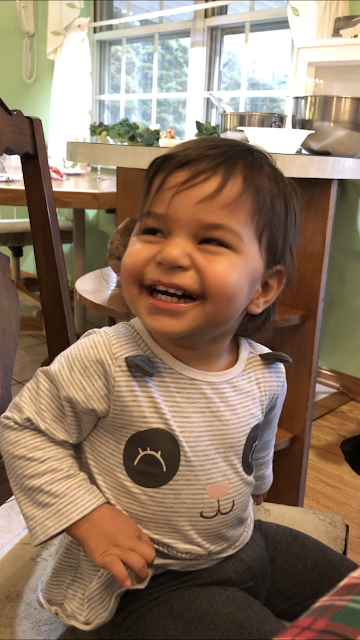 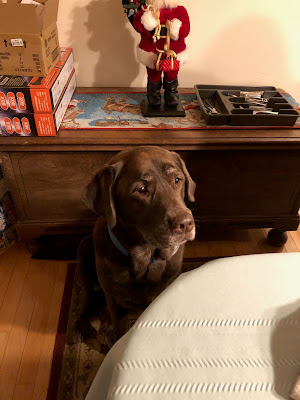 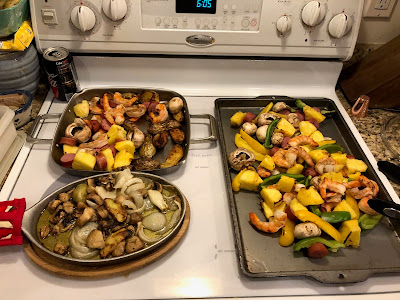 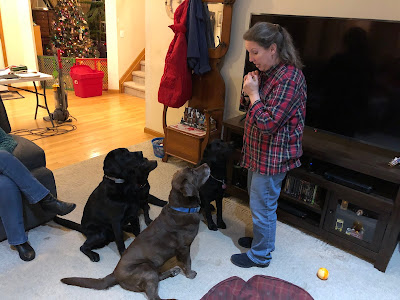 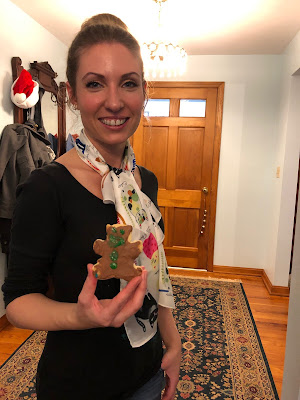 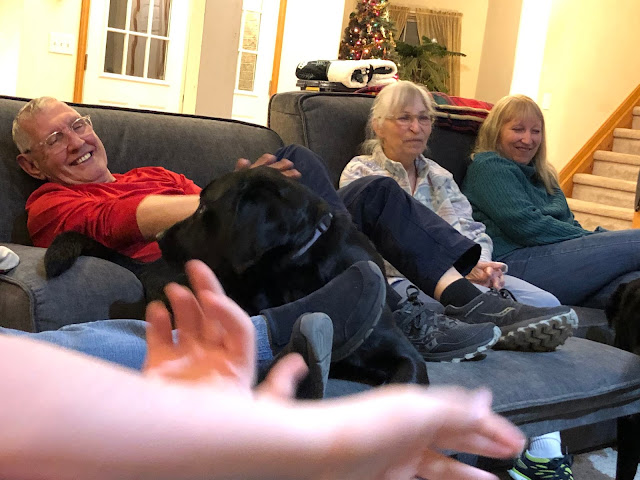 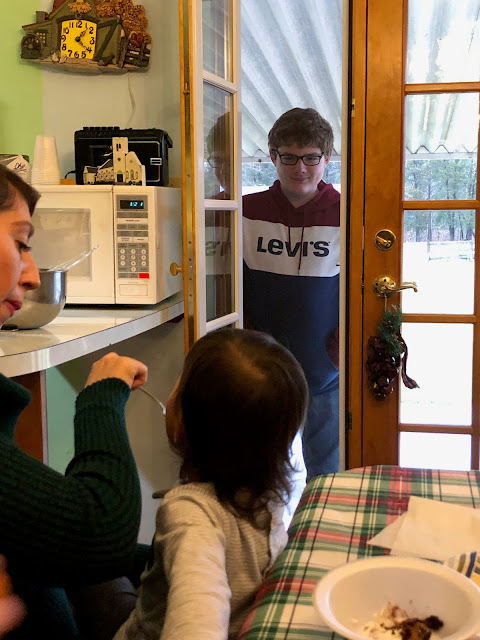 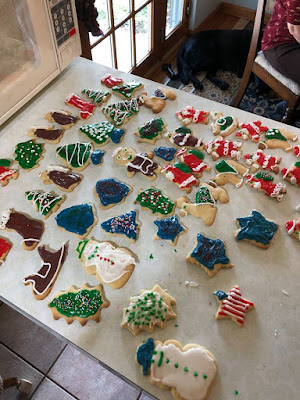 For me this meant eat lunch with my in laws, tell jokes with my nieces, and have some homemade raspberry wine. All of which were infinitely more fun than watching the Browns lose yet again - this time to the Baltimore Ravens.
I did try my hand at cookie decorating. As always I wasn't constrained by the season. 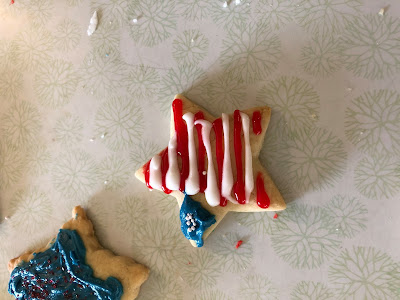 I also tried to do a baby Yoda. Epic Fail. 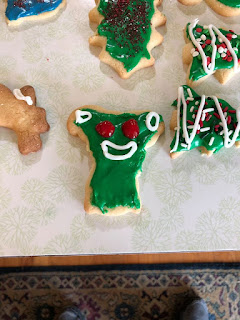 Depending on who you asked it's either the love child of Gumby and ET or Sid the Sloth from Ice Age.
Posted by Phil Barth at 8:35 AM No comments:

A little different take on the Sunday project day

Officially this is what happened on Sunday (instead of watching football):

I flew to Memphis.

It was an evening flight, but Sunday afternoon was spent packing for the trip.

I did get to see the Patriots team jet at the Cincinnati airport.


I also saw a bunch of fans in Patriots jerseys at the Greater Cincinnati airport. There was one guy at the airport wearing a Bengals jersey. I assume he lost a bet.

From a Patriot fan's point of view this makes a lot of sense. Getting a flight to Cincinnati then buying a "scalped" ticket (can we really call it "scalping" when the tickets are probably nowhere near face value at this point?) is likely cheaper than buying tickets for a home game.

My son was at the game (he got a free ticket). He said there were way more Patriot fans in the half full stadium than Bengals fans.

As a side note, when I got off the flight in Atlanta a pilot was waiting to board. He asked me if the flight was coming in from Boston (given all the Patriots jerseys). I said no and explained why there were so many Patriot jerseys.

He told me that before the Patriots bought their own team jet he had flown a couple of team charters. The Patriot charter flight lands in Providence. When the plane gets to the hangar all of the players cars (Escalades and more) are started and warmed up, ready to go.

Such is life in the NFL. It's a tough game, but the perks are great.

And occasionally an NFL player can let that go to his head and act like a spoiled brat, if the coach lets him.

And that's why I have completed a large number of projects this year.

(Ironically none of them involved a kitchen change... something the Browns will hopefully do this year).

Posted by Phil Barth at 7:57 AM No comments:


They moved one of our old couches to the basement. They moved the other to the front yard. NOT as a permanent thing, but it was fun to sit on with the dogs one last time.

Tom and I then hooked up the new TV.
Around 5pm the next truck arrived and took away the old couch.
By the end of the day it was two brand new rooms.

Posted by Phil Barth at 8:12 AM No comments:

First off the game that I didn't see:

The Browns won. It wasn't pretty, but they won. I watched the highlights later. Baker Mayfield threw two interceptions, but one was a terrible call. The receiver was down, the linebacker took the ball after. To call that an interception is wrong. But even if the call was right - the ball hit the receiver right where it should have.

I could go on, but this is a blog about what I did instead of watching football.

On Saturday we borrowed an appliance dolly and moved the 160 lb. huge TV downstairs. It will become a video game TV - with Netflix connections using a Roku box as well.

The key in all this was to get me out of the way.

As part of the execution of this project (note that the word planning wasn't used in that sentence) I moved things around to get into the crawl space. While I was there, I took the file cabinet out and moved it next to the desk.

Sunday's project was to clean everything out of the file cabinet and re-organize it. That took WAY more time than planned. But at the end of the day I had an organized file cabinet next to the desk. 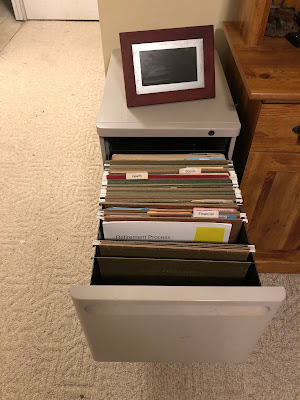 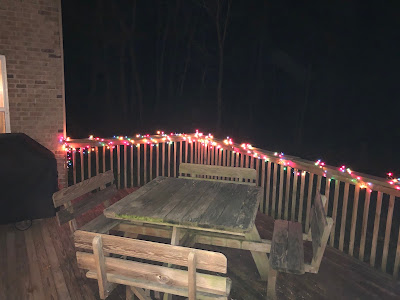 And I reorganized my wine rack in the bar area. 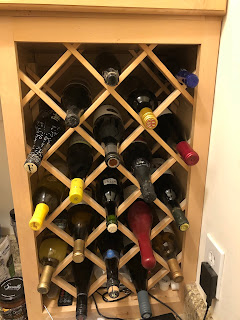 Finally I was able to put the components back in the entertainment center. 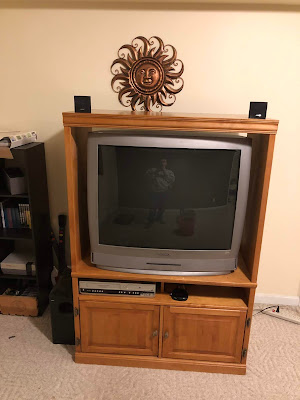 Posted by Phil Barth at 7:55 AM No comments:

A quick recap on the Sunday project list and where we are at:

1. Spent quality time with extended family.
2. Read a book and did a GTD review on a flight to Canada.
3. Painted the basement wall in preparation for the new office and entertainment areas.
4. Cleaned out the detached garage.
5. Cleaned up the yard and burned up everything in the fire pit (killing lots of weeds in the process).
6. Assembled a basketball hoop.
7. Cleaned and organized the master bedroom closet.
8. Got a puppy!
9. Assembled a spice rack, finished a cornhole board and cleaned out the bog garden.
10. Hiked five miles.
11. Fixed a large hole in the wall.
12. Painted the finished basement, put the guitars on the wall, moved the desk.

The first win: I wasn't subjected to watching the Browns lose to a team starting its third string quarterback. Again. (Denver was the first time).

The second win: We got the basement area (future home office and entertainment area finished: 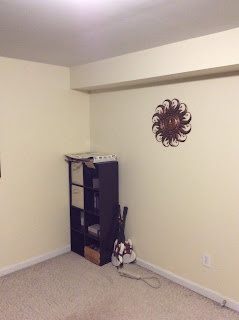 One corner of the finished basement - it is awaiting the TV.

And we got the desk cleaned and put in place for the home office: And once I moved the desk I realized I could use the pegboard to mount some (not all, but some) of the guitars that my sons Joe and Kenny use the record music with their band Starless. 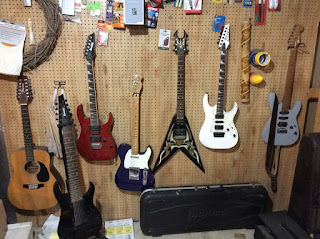 And once we got all that done I decided to get the new tree up. By this time the game was long since over, but I didn't want to sit down and watch the "highlights". 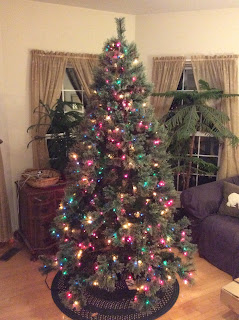 Posted by Phil Barth at 4:36 PM No comments:

Saturday Project... because it's a four day weekend

We did a Sunday project a day early - mostly because we knew it would be a big effort that will conclude today.

The Saturday project was painting the rest of the finished basement rec room / home office area.

This included painting over the former large hole - it's completely covered.

For today's Sunday project we will take the tape down, put the outlet covers back on and move the desk to its new home.

And since it's going to be over 50 degrees we will also clean up the sticks and limbs and leaves that came down in the high winds earlier this weeks. Pics to follow.
Posted by Phil Barth at 5:20 AM No comments: