A great side benefit of cleaning up the basement

Our Sunday project this week was I found a box of my old Games Magazines. From around 1998 through 2003 I had a subscription to Games Magazine. I always read through The Games 100 (as I made my Christmas List). I sometimes worked some of the pencil-wise puzzles. I also took them on vacation - we would work the crossword puzzles in the car or during a rainy day.

But more often than not, the Games Magazine was placed in a "to be worked later" pile. Eventually that pile was moved to a box. The box was put on a shelf for a future time when I had more time.

Well, the future is now. 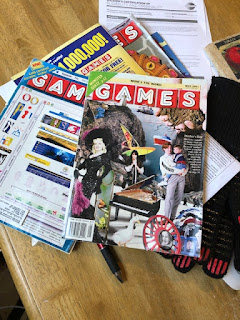 I pulled out the magazines, and started working through some of my favorite kinds of puzzles (paint by number, logic and a few others.

There are rumors that this COVID sheltering could go on a long time. Good thing I have plenty of magazines!