A great thing - getting something in the mail

When I was a kid occasionally I would send away for something. This frequently involved saving cereal box tops, maybe getting  a check for a dollar, getting an envelope and stamp, sending it out, and waiting.

Later when it came in the mail it would be a thrill. I remember one in particular: I sent away for a baseball game. It had a spinner, and different batter cards. When it came I took it in the house and opened it. It did not disappoint.

Now things are much faster. And much more frequent.

Amazon used to offer the "Look what's in the mail!" thrill. But now it's more like - "What's today's shipment?" And it's hard to get excited by mower oil or eye drops (two of this week's shipments)

But yesterday I got the thrill of something in the mail again. My friend (and excellent speaker) Kenneth LaFrance has a studio in New Orleans where they makes coasters and other cool works of art. Each one is unique. I had been waiting for "the right one", even though I didn't know exactly what "the right one" was.

Then early in the week he posted a set that looked great. I sent him a message and yes they were still available. A quick paypal transaction later, and they were mine.

A couple of days after that Beth and I took our daily COVID-19 walk. We checked the mailbox and there they were! I was like a kid bringing the package back to the house. I could hardly wait to open it up.

And here they are - awesome! Thank you to Kenneth LaFrance for bringing back the kid in me. (And let's just sidestep the whole "Did Phil ever really grow up?" question). 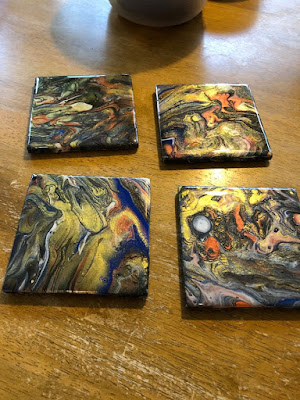