Attending a Toastmasters Meeting on Every Continent - Australia / Oceania

Here's something I can do right now that wouldn't normally be possible (not in a compressed time frame anyway): I'm going to attend a Toastmaster meeting on every continent.

Well, six of them anyway. My internet research indicates that the last time there was a Toastmasters club in Antarctica was 1995.

North America (of course) was in the bag from the start.

Last night I checked off Australia / Oceania thanks to my good friend Kingi Biddle. Kingi lives in New Zealand. I've always said I want to go there and attend one of his meetings in person.

Kingi and I met as finalists in the World Championship of Public Speaking in Las Vegas in 2011. We hit it off right away. After the contest we struck up a friendship on Facebook. This friendship has involved helping each other in speech contests to this day. We are the founding members of "Team Biddle" and "Team Barth". Also the only members.

Additional note: Kingi and I were able to meet face to face in 2013 as well at the World Championship of Public Speaking in Cincinnati. Kingi was a contestant (and finished second in the world). I was an attendee.

Recently I reached out to Kingi to ask if I could attend a virtual meeting with his club. He was gracious as always and invited me to their first virtual meeting. In fact the entire club was gracious. I was invited back to next week's meeting, where I will practice my contest speech.

Two down, four to go. (Unless someone opens a club in Antarctica). 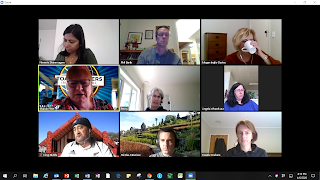