Attending a Toastmasters Meeting on Every Continent - Europe

It was a very welcoming club. I got there early and visited with two members (Moira O'Brien and Ted Mellamphy). Ted asked where I was from. When I said Ohio, he started singing the song "Banks of the Ohio" (I have since loaded it on my iPhone with a couple more Olivia Newton John selections). Moira grabbed her guitar and accompanied him. Very cool.

The meeting was a blast. Great speeches, great evaluations and great table topics. I was able to answer one of the questions: "Are you missing sports right now?" (That was an easy one... "Yes because it's baseball season and the Indians are normally good... football season wouldn't be a loss at all..." Okay that wasn't my exact answer, but I was able to go for over one minute easily).

This is another club I would love to someday visit, for three reasons: 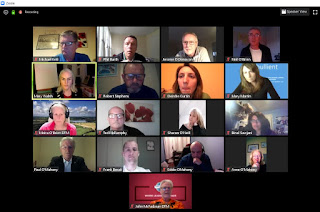