Something I will carry past COVID-19: Buy local

Full disclosure: We went with Lee and Jacks for our refrigerator before COVID-19, so it's not fully accurate to say this is an entirely new thing.

On Wednesday we had a repairman come out and look at our washer. It kept getting an error code after my aforementioned fix. I wondered out loud if the error (SUD or F2 depending on the day) was a damaged drain pump - related to the fact that I didn't know I was supposed to clean out the filter occasionally.

The impeller in the drain pump was damaged and on the way to ruin.

I also noticed we had a piece of the door seal torn away. This, coupled with a sometimes slow (or not) draining machine, caused a leak.

So we called someone from Central Service. The repairman was very nice, and diagnosed the problem: It needed a new door seal and a new pump.

The price of those was over halfway to a new machine. The current machine was almost 13 years old.

I found a new machine on sale at Lowe's. I was about to order when I decided to give our local appliance store (Lee and Jack's) a call. I told the salesman what I wanted. A little while later he called me back. They didn't have the exact model I wanted (Note: The Lowe's site said limited inventory, so there was a chance they didn't have it either) but they had something close for $100 less than Lowe's (and $70 less than the washer we bought 13 years ago). I looked it up, and said "We'll take it".

One day later, the delivery truck from Lee and Jack's was there. The delivery guys wore masks. We stayed a social distance away. They hauled away the old washer and installed the new one.

And it looks really cool.

Faster delivery, better price and if we have any issues, Lee and Jack's will be out here much faster than a chain store would be. Win/win/win. 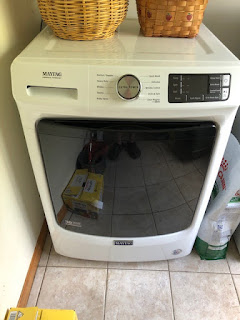