They were on sale, so we decided to give one a try.

The next day, Tom, Beth and I had our K Cup draft.

We picked in order of age, so I had the number one pick. There really was no Zion Williamson type of k-cup, so I offered Tom a trade down.

He didn’t see a franchise k-cup either, so he declined.

The coffees were so good we bought two more packs. One for us and one for a gift.

This box, it turns out, is from a 2019 buy at Jungle Jim's, one we just found in the closet as we cleaned it out yesterday. Note that we had a draft, and two flavors are already gone. 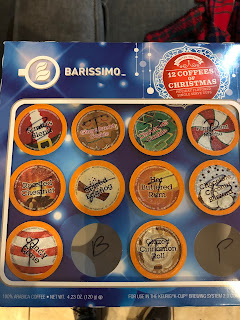