So I had this orange and white Bic four color pen that I used as a speech prop (video to follow at some point).

I looked for a little while, then decided that it wasn't really worth the time. New four color pens are less than $2 each - and i have a blue and white one available.

Who am I kidding? I have a dozen different four color pens available.

File it under "Unsolved mysteries".

Yesterday we had a new mystery: What was wrong with the washing machine? It kept putting up this error code (occasionally) F02 and stopping. So we would work and work, restart, and eventually it would finish the cycle.

Given that plumbers aren't cheap, and maybe not even available, I decided to investigate this mystery.

I googled the error code "Error code F02 Maytag Epic washing machine". And there were multiple videos on how to fix it.

This morning I did the fix. It took a lot of work to get the front panel off. I had to use multiple tools to loosen the screws. In the video the machines were on pedestal drawers, so access was easier. Ours sits on the floor, so access was tricky.

In fact, my wife won a bet with herself. She bet that I would utter a curse word within three minutes of starting. And sure enough, I did.

But once I got the panel off everything was actually easier than the video showed.

I removed the drain trap and guess what? I solved the mystery of the missing four color pen too! 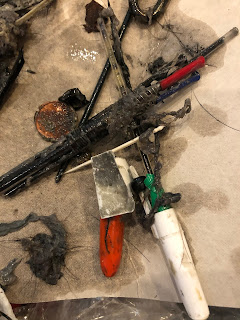