"Individuals who watched just three minutes of negative news in the morning had a whopping 27% greater likelihood of reporting their day as unhappy."

Here's the link to the full study.

Here is a picture of our dog Bailey. 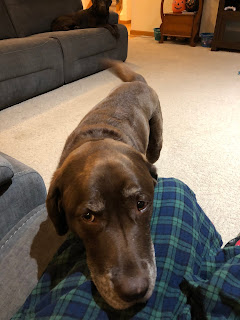 Bailey is now nine years old. She has had two knee surgeries. Her joint pop when she gets up and down.

But look at the picture. The tail is out of focus. Almost every picture we take of Bailey standing up has a tail out of focus. Because she's always happy, and always wagging her tail.

Here is a picture of Maisy. 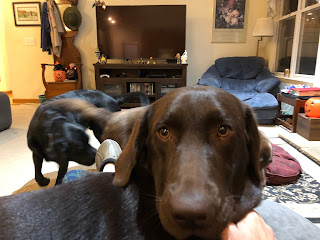 Maisy is one year old - still a puppy. Every morning (after her breakfast) she jumps up on the couch and sits on my lap for around ten minutes.

And this is Jesse. Jesse is almost four years old, and more of a cow than a dog. But he still likes having lap time. And I like it too. 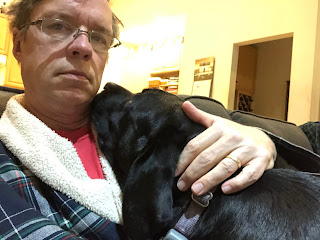 When you start your day with bad news, you are 27% more likely to have a bad day. I haven't done an experiment to validate this, but I believe that you get an additional 27% by starting your day happy (like Bailey). For me that involves letting a dog (even a big one) jump up on my lap for a few minutes.

When you start your day holding a dog, even a huge one,

Posted by Phil Barth at 6:16 AM No comments:

The return of the Sunday project

Last year at this time I was well into my Sunday afternoon project list.

And here's why I did it.

Basically I threw a fit because the Browns blew their first game. But the fit worked out really well for three reasons:

This year the Browns opened with a 38-6 embarrassment in Baltimore. So I swore off Sunday afternoon football.
Five games in to the season that looks like a bad choice. The Browns are 4-1.
That said, even without reasons two and three we are enjoying Sunday afternoon projects.
Okay Phil - why aren't you posting them on Social Media?
Because we bit off really BIG projects to start. Neither are completely finished. Both will be great posts when they are done.
Project One: The church pew.
Several years ago (more than I care to admit) we bought a pew at the Catholic church rummage sale. It's likely from the 1800s. It needed re-finishing. And sanding. And staining. And more straining.
Current status: It's done and airing out in the garage. It will soon be moved into its permanent home, and all the before and after pictures will be posted. PLUS: I will post all the things I learned (the hard way) on this project.
Project Two: The basement reorganization.
I love board games. I have collected a lot over the years. More than 400. They have been stored in the basement in various areas.
This project has two phases:
We worked one Sunday on this so far.
Here is the four week summary of the Sunday projects to date:
Week 2 (Browns beat Bengals on Thursday night) - Pew project.
Week 3 (Browns beat Washington) - Pew project.
Week 4 (Browns beat Dallas) - Games project.
Week 5 (Browns beat Indianapolis) - Weekend in Indiana, hiking and shopping.
Week 6 (Browns are playing and hopefully beating Pittsburgh) - Town cleanup project with Boy Scouts followed by family dinner.
Posted by Phil Barth at 5:30 AM No comments: