One of our goals for 2021 is to try making a new recipe every week. This week's effort was Cincinnati Chili Pork Chops.

Once again, this recipe was taken from the Book Canada Grills! By Char-Broil. It was an Ollie's Outlet find. $2.99 for the book of 222 recipes. 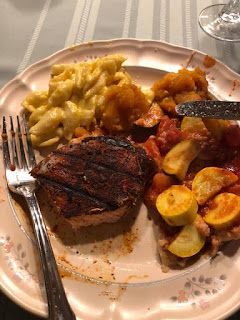 THE INGREDIENTS
6 pork loin chops, 1 inch thick
½ cup apple cider vinegar
We actually did nine chops. This is because we bought a boneless pork loin and I cut it up into chops (one inch thick). I cut the chops after making the rub. I also peeled off some (but not all) of the fat.
As for the apple cider vinegar, I had a squirt bottle of it. Instead of brushing it on the chops I just squirted them.

Whisk together rub ingredients in a large bowl.

Brush each chop with vinegar (I actually used a spray bottle - see above note).

Then press a generous amount of rub on all surfaces. (I just put the rub in a pan and pressed each chop into the rub (on each side).

Place the chops on a plate and cover with plastic wrap. Refrigerate for up to two hours.

Remove from the refrigerator one hour before grilling.

Preheat the grill to medium high and spritz the chops with canola oil (I forgot this part. I did spray the grill with Pam grilling spray so they didn’t stick).

Sear over direct heat one to two minutes per side.

Move the chops to the warming rack, or some area with no direct heat and continue grilling until the chops reach an internal temperature of 160. (I got tired of waiting around 150 degrees so I moved them back to the direct side to finish).

RECAP: THE RECIPES SO FAR

Week four: This one

All of the above become links